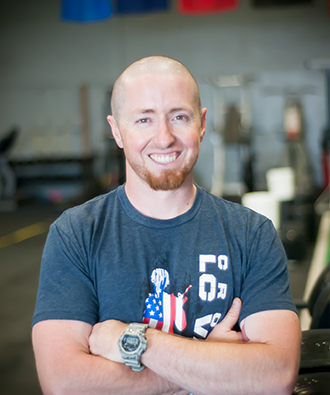 Coach Tyler Beck joined us several years ago from CrossFit Post Falls, you can see Coach Tyler helping out with morning classes and chasing around his 17month old daughter Chalis. If you check with anyone from the 6am class, they will be sure you know that “Cha” rules the roust at the gym. When Tyler is at the box or with Cha, he is running a Wall Tent business out of Moscow. Glamping anyone? Coach Tyler enjoys cranking up some Rage Against the Machine, when it’s just him and his bar. His favorite weightlifting movement is the Clean and Jerk. We asked Coach who his personal hero was and he told us “My parents. They have always had my back no matter the shenanigans I put em through! And there’s been a lot..” We also wanted to know why he choose the hero wod he did. We figured it was because it hit close to home. We were right.  “I chose this hero wod because I grew up in the Cd’A area where Sgt. Moore worked. This was the first hero wod I completed during a class, it was solely dedicated to a local hero and it kicked my ass.”

Sgt Greg Moore was killed in the line of duty on May 5, 2015. He was an 16 year veteran Police Officer for the Cd’A Police Dept. While on patrol he was shot by two men had stolen his patrol car. Office Moore is survived by his wife and two kids. A tribute wod is held every year by CrossFit Post Falls and proceeds and support go to the local police stations.

The AMRAP length represents Sgt Moore’s badge number. 18 reps of each movement represent the 18 years Sgt Moore spent as an LEO. We chose the movements because “Fight Gone Bad” was one of his favorite work outs. We replaced the wall balls with thrusters to make the workout possible to do outside of the gym, and replaced the row with double unders because that was Sgt Moore’s favorite movement.