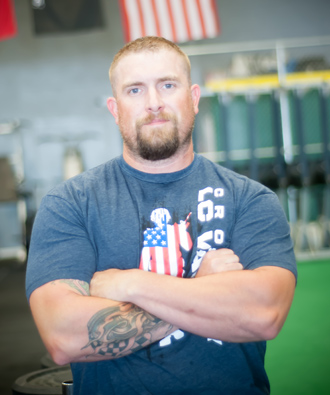 Coach J has been apart of CrossFit LCValley as first a member, then a coach, followed by owner, since late 2012. If he is doing extra work during open gym, we can bet it’s a heavy clean and jerk. And the rock music is loud enough the neighbors can feel it. We asked Coach J who his personal hero was and he replied.. “My Grandpa. One of the hardest working people I’ve ever met. Did everything for his family and rarely asked for anything in return. ” we also wanted to know why this specific hero wod. As a former 5 year US Marine, we weren’t shocked his choice was military related. He told us “The reason I picked this WOD: I picked this because it’s an example of what real sacrifice is. He gave up an NFL position to serve his country and gave his life for what he believed in, not money or fame. It exemplifies in my opinion what a Hero really is. “

Patrick Daniel Tillman (11/6/76–4/22/04) was a professional football player who left the National Football League and enlisted in the United States Army in May 2002. He joined the Army Rangers and served multiple tours in combat before he was killed in the mountains of Afghanistan. He was a recipient of the Silver Star, the third highest honor in the military, and a Purple Heart. Pat is survived by his wife Marie. He is also remembered through the foundation named in his honor.

Founded in 2004, the Pat Tillman Foundation invests in military veterans and their spouses through academic scholarships – building a diverse community of leaders committed to service to others. The scholars chosen show extraordinary academic and leadership potential, a true sense of vocation, and a deep commitment to create positive change through their work in the fields of medicine, law, business, education and the arts.