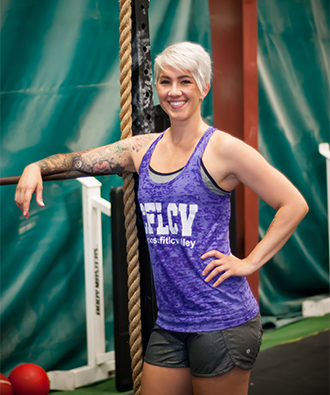 Coach Katie Rigby, Katie has been apart of CFLCV for 6 years, her husband Nate soon followed the year after and their daughter Charli is growing up in the box. I bet if you have ever been in a 5:30 class Charli has greeted you at the board. If you asked Coach Katie to program a weightlifting movement, it would definitely be the Clean and Jerk. Chances are the music would be loud and thumping with some Lil Jon blaring. We asked Coach Katie how she came across this HERO WOD and she told us “My grandmother, Margaret Laford, was a member of the Women’s Army Corp. She was honorably discharged as a Staff Sargent in 1951. She talked about it being the best time of her life. I was curious about women in the military and the history and I found Ashley’s story. ” If you ask Katie who her personal hero was, she would tell you “My Mom, she had to raise me and dealt with the unthinkable after losing my dad in a tragic car accident. She was strong and forged ahead.”

She died on October 22, 2011, in Kandahar province, Afghanistan, from wounds suffered when insurgents attacked her unit with an improvised explosive device.

She is survived by her husband Captain Jason Stumpf, her parents Robert and Deborah, brother Josh, and sister Brittney.

In 2011 Ashley and a few of her teammates were recruited for Ranger and SEAL combat missions. They were part of what would come to be called cultural support teams, or CST. CST was a group of female soldiers who are trained to support US Army Special Ops in scenarios where such engagement would be culturally unacceptable for the male soldiers to perform. Twenty or so of these women would accompany Rangers, SEALs, and other special ops teams on “direct action” missions, including nighttime raids aimed at keeping pressure on the blossoming insurgency. They boarded the helicopter in the night’s starry blackness every evening like any other member of the team. And on the objective, they would take fire, find people and things and gather information aimed at accomplishing the night’s mission.

They served their country and placed themselves in harm’s way each night. Ashley and her teammates were trailblazers. These ladies paved the way for women in the armed forces.